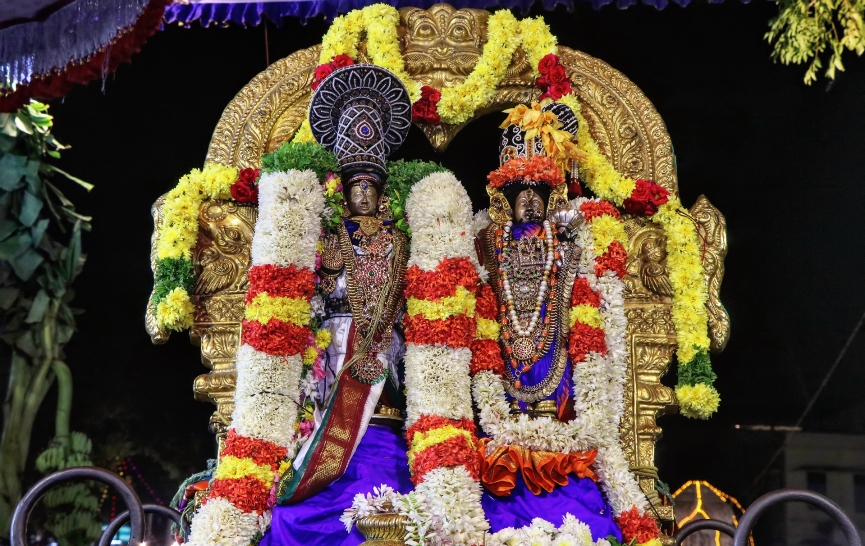 The chitrakulam tank was lit with colourful serial lights.

On the first day (Feb 4), the teppam took place for Sri Adi Kesava Perumal and Goddesses Sridevi and Bhudevi.

On the second day (Feb 5), Sri Adi Kesava Perumal and Goddess Andal in rangamannar thirukolam were taken in a procession around the Kesava Perumal Streets. The procession stopped in front of a few houses where devotees offered fruits and camphor.

The deity of Sri Pezhalvar with folded hands was taken in procession facing Lord Perumal and Thayar in front.

Following this, the deities were placed on a specially decorated float that was taken around the nirazhi mandapam of chitrakulam tank nine times.

The temple priests recited the naalayira divyaprabandams on the first two rounds. During the remaining rounds, students of Sruthinikethan Arts Academy, Villivakkam sang bhajans and devotional songs at a stage put up in front of the tank.

Crackers were burst at the four sides of the tank by the temple volunteers.

Artistes played nadaswaram, thavil, gowri kalam and other musical instruments during the rounds. Many devotees gathered around the four sides of the tank to offer their prayers. 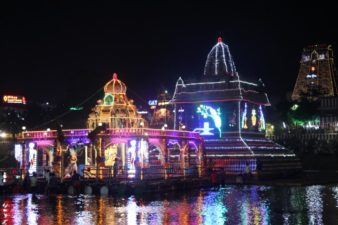 National Crafts Expo is on at Teja Bhavan, R. K. Mutt Road. On till Oct.29. On display will be exclusive Indian handicrafts,...

War Widows Welfare Association, R. A. Puram celebrated Elder’s Day in its premises on Oct.10. Around 50 elders including men and women of the Association, Vishranthi, an old age home at Palavakkam participated in these celebrations. MM. Rajendran, former Governor of Orissa was the chief guest. The President Savitri Vaidi and Vice President Susheela Rajendran were also present. (photo middle left). It was held at ‘Nimmadhi’, Raja Street Extension, R. A. Puram. Ph: 2464 0092. The programme included a magic show by R. Raman.(Photos...

Madras Youth Choir  (MYC) was founded by late M.B. Srinivasan, a well-known music director and a pioneer in Indian Choral Music. The Choir has started the sub junior category. This is open for children of the age groups 6 to 9. Children will be trained in the art of choral music singing. Classes will be held at Children’s Garden School, Mylapore. MYC is also open for admission to its Junior Group - 10 - 15 years group. Adults and collegians who wish to join the Senior Choir can also contact MYC. For more details call 94449 30517, 99944...

Mahima Cultural Center, preschool and playschool located in Mylapore celebrated vijayadasami by organising akshara byasam (rice writing) ceremony for its school children. The children sat on their parents laps and wore on the nellu (rice). The school is located at Nattu Subaraya Street, Mylapore. Ph: 2467 2155.

The South Madras (Chennai) Bharat Scouts and Guides, Mylapore had organised a scout and guides pioneering camp at Besant Scout Camping Centre. Students were guides in knotting, lashing and tent pitching session. In the evening students participated in the campfire and presented songs and dramas. S. Shriram Dist Secretary was the chief guest for the campfire. Students also had the opportunity to do the gateway, Monkey Bridge, signaling tower and tree shelter. Cine actor Dilli Babu was the chief guest during the valedictory event. He...